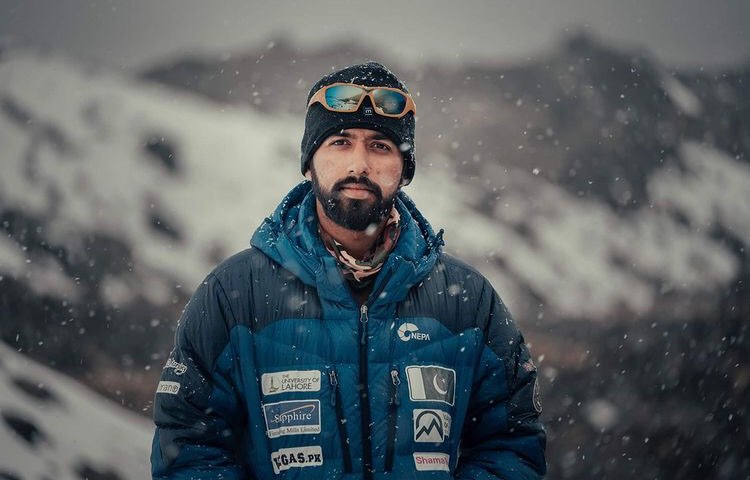 Every journey starts from the dreams of making it  and the person about whom I am writing today , has came faraway from that beginning and has achieved a lot in this path of love and determination for mountains , nature ; for the people within those areas and for those too who wants to make a journey of their own ❤

Saad Munawar is A Muslim book writer and a mountaineer from Islamabad , Pakistan who is better known for his world record of going across 3 major mountain ranges and making a route through them in 23 days . more over he is a author of 2 book and has made a few others records as well along with this he has a wide history of trekking and mountaineering . he is not only a citizen of Pakistan but also a loyal patriot who is proving his love for the country everyday .

Mr. Saad was born on the 4th of November 1994 to a noble family . By his way of being around people it can be easily noted that his upbringing was done in a very nice way .As for sports;  his love for sports is also inherited in because of his family , this love lead him to the sport of mountaineering .  He started his early education from Army Public School and then Foji Foundation . He has done BS in telecommunication engineering from MCS NUST and later did masters in information security from the same place . Its quite obvious from this that he is one intelligent and educated person a part from being an expert in mountaineering and writing

From the childhood times Mr.Saad was enthusiastic for sports like cricket or football but the actual attraction for trekking and mountaineering started when he went to Ansu lake and Palika parbat’s basecamp ( fun fact : this is also from where I started my journey ,tho  I was around 5-6 years old yet I felt that vibe that yes this is it , its the edge of my desire and here I am for the mountains ). He started the journey of his passion from 2010 and by now ; 10-11 years later he has achieved a lot a few of his achievements are written below :-

A part from the mentioned ones SAAD MUNAWAR has been to almost all the basecamps of well known mountains . he has also been to many passes and local areas .

Other then being a mountain climber he has also managed expeditions ; His most recent one was of Annapurna ( abdul joshi and serbaz khan were the climbers )and it was a huge success .

Along with being the writer of 2 books you will also see him as a blog writer on his social media accounts a little detail of his books is given below :-

MR Saad wrote his first book on K2 * Chagori *( in Urdu language )in 2016, he became one of the youngest  travelogue writers in Pakistan to do so. Because of his mastery at the language and travelling he is also known as the mountain writer . in his book you will find the information about the areas around k2 , the mountain it self , a guide for people , and the experience and thoughts of Mr saad about the whole area and  the mountain .

RAKAPOSHI KA SAE MAIN ( IN THE SHADOW OF RAKAPOSHI )

His second book * rakaposhi ka sae main * was launched in 2018 . this book all about rakaposhi and the valley of nagar and hunzo which are under the shadow of the mighty huge mountain rakaposhi . it not only discribes the beauty of nature but also the people of those areas and the experience of Mr Saad along with his mate ; when he visited the basecamp of both rakaposhi and deran peak . It was another of his master peice which has been read by many people .

AIMS FOR THE FUTURE :-

Its a very natural thing , when some one is determined to something then they work for that cause . Mountaineering it self is a sport which might the best sport all around yet it is not that strong in terms of gaining popularity which is a big problem . It causes problems like no insurance for the mountaineers , no governmental support , less sponsors / no sponsors for the expeditions and less public appreciation because many dont understand the sport because they dont know how it feels like to love the mountains , to do something for the nation .

Its not wrong to say that you will find a mountaineer on every corner in the north of Pakistan , one of the best climbers in the world like Muhammad Ali Sadpara , Hassan Sadpara , Hassan jan , Ashraf Aman and many more belong from Pakistan , but due to less support  to these legends many of them had worked / are working as HAPS ( high altitude potters ) rather then being there alone for records and summits . And when some accident happens with them then many problems like late rescuing or late approval of rescue missions causes harm or death to many . and in cases of harms or death if ay insurance by chance is there then the amount is so less that its hard for the familes of the one’s survival

keeping all these problems in mind Mr Saad munawar has been working on many projects along with his friends ,like value of life ( you can see a whole video on the value of life expedition by mooroo x saad munawar . Basically his this project is all about making people to get to known the unsung heros who are out there to make pakistan proud , its also for getting attention of public on mountaineering and the hard work of people , and also for supporting the families of the climbers who have lost their life ,

along making a name of mountaineering around the public , he is also working on guiding the new people how to be one . Lately mountaineering is recoganized by a large number of people and it has also inspired many as their passion or profession ; for guiding them all about it Mr Saad Munawar has done many things as well . During an interview he said

“MOUNTAINEERING IS A VERY SPECIALIZED FIELD , YOUR PHYSICAL AND MENTAL FITNESS IS PREREQUSITE IF YOU HAVE THIS , YOU CAN BE IN THE FIELD .”

‘THEN COMES THE SKILL AND EXPERIANCED BUT CONFIDENCE IS THE KEY , ITS NOT AN EASY SPORT TO SAY THE LEAST , WHEN YOU PUSH YOUR LIMITS , ONLY THEN YOU CAN MAKE IT POSSIBLE .”

He truly believes in giving back and providing opportunities for others. Whether its guiding his juniors or going out the way for sponsorships to make a project successful. It is because of his extreme love for Pakistan and its people. He believes that no one will come and change anything. Its us who can take charge and make a difference

OK OK !  so the first thing that I have got to say is that this blog is written all out of respect I have got for not only for what he is contributing to this field and for all that he is struggled but also for the fact that even after so much of success he is still so down to earth , he is always there for every one to help them out with things . also no matter what you will always find him supporting people , praising them or preaching about them . Also the fact how connected he to Allah Almighty that even on mountains you would see him reading Quran or reciting verses or Giving azan . In short all I got to say he is utilizing his live in good means . This is why he was worth writing on

THANK YOU FOR READING IT

all pictures on the blog belongs to him

video that helped me out alot :- https://www.youtube.com/watch?v=LHfCexOjsAs